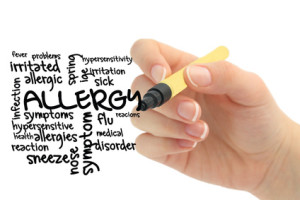 Have you noticed? Food and environmental allergies have become more and more common.

Packaging for foods alerts us to the inclusion of tree nuts, dairy and gluten, school classrooms have been posting to protect anaphylactic children are present and grocery stores have whole sections designed for the gluten free lifestyle.

So, what is happening? It appears there is an epidemic of disease coming and it’s not the swine flu. “The World Allergy Organization (WAO) published its first Report on the extent of allergy and chronic respiratory diseases worldwide. At the time, they called for immediate collaboration to tackle the current escalation in allergy cases. In the last 20-30 years, the prevalence of allergic diseases has increased significantly – a trend that shows no signs of abating. It is estimated that 400 million people worldwide experiences allergic rhinitis and 300 million people worldwide have asthma with estimated economic costs exceeding those of tuberculosis and HIV/AIDS combined. One of the most alarming findings from the report is that while the incidence of allergy and associated diseases has increased significantly, the number of healthcare professionals trained in the diagnosis and treatment of allergy has decreased, leaving many patients undiagnosed and untreated” This statement is quoted from Medical News Today in June of 2008, almost 4 years ago.

From 1997 to 2007, the number of children with food allergies rose 18 percent, according to the Centers for Disease Control and Prevention.

About 54 percent of Americans are sensitive to at least one allergy-inducing substance, according to a national survey conducted from 1988 to 1994 by the National Institutes of Health (NIH). That’s about two to five times higher, depending on the allergen, than the rates found by NIH between 1976 and 1980.

The biggest concern for our community should be that as if we look at “sensitivities” as well as true allergies, the numbers of illnesses caused may be staggeringly overlooked. Research already exists to support this theory in relation to mental conditions such as depression, ADHD or anxiety and other health problems such as migraines, fatigue, and chronic pain.

While researchers scratch their head looking for answers, if we look at the body holistically and logically the answer is right before us. We are surrounded by toxins from food, water and air that our system is constantly fighting. Just recently, the World Health Organization has finally taken a stance against the use of mercury in dentistry. Reports of toxins in food, polluted water and overuse of medication come out almost daily. Meanwhile, stress related causes of illness rise, meaning that our ability to adapt to stress is declining, an increase in genetically modified foods is slowly sneaking into our diets and disease related to lifestyle, such as heart disease, cancer, diabetes and more are the true plagues of the 21st century.

Traditional allergists are only now beginning to take notice. However, allergies and sensitivities may very well be overlooked if you suffer from any chronic pain conditions and dysfunction, including fibromyalgia, RA, MS, and migraines. Historically, these conditions are not looked at as an allergic reaction, but it is time to propose a novel look at these diseases and how we can help ourselves and our family as the medical community struggles to accept these concepts.

If we look at the root reaction of the body to an allergen, it is logical that any presenting area of weakness or dysfunction can be aggravated or inflamed by a food or environmental sensitivity or allergy. An allergic reaction occurs when your immune system reacts to what are usually harmless, common substances, such as pollen, cat hair, dust or foods such as sugar, dairy or gluten. An antibody known as IgE binds to the offending substance, called an allergen. This binding triggers a chain reaction that ultimately results in the release of histamines and creates the commonly known symptoms including sneezing, wheezing and coughing or digestive distress. However, because this reaction results in the release of inflammatory histamines, it can cause inflammation globally. If the reactions are subtle and consistent, inflammatory agents will be present in tissue, joints, any mucous rich area or areas with associated cell bodies.

A classic example of this is related to headaches and gluten sensitivity. Not until the late 1990’s did research discovered new roles of glial cells in the brain – those cells which make up about one-half of the brain’s mass.  Before the last decade the glia were characterized as “support cell” with no clear functions.  It is now understood that glia are capable of being activated as immune system agents.  Glia does engage in sending “messages” to each other and perhaps even to brain neurons. When a person who is sensitive to troublesome proteins, especially alpha-gliadin in gluten and casein in milk, it can trigger a signaling to glial cells in the brain causing them to inflame and swell thus leading to symptoms of migraine headaches. What this research shows us I have seen dozens of times, clinically in my practice and this same “signaling” in the gut can inflame any tissue in the body especially when there are multiple hidden food sensitivities.

According to a May 2011 ABC news report, an estimated 3 million Americans, or 1 in 133, have celiac disease. However, most of them aren’t aware of it. Only 200,000 to 220,000 Americans have been diagnosed, said Dr. Alessio Fasano, director of the Center for Celiac Research at the University of Maryland in Baltimore. This research center has concluded that gluten disruption of the nervous system can lead to nerve damage, neurological diseases, mental disorders and more.

Another 300,000 to 600,000 Americans avoid gluten because of a wheat allergy, Fasano estimated. A third group within the growing gluten-free constituency comprises the 18 million to 20 million Americans who Fasano estimated to suffer from gluten sensitivity, with pain, fatigue, headaches and brain fog much like that of celiac patients. However, his research has found that although they don’t make the same antibodies that define celiac disease, they have an inflammatory reaction to gluten. Keep in mind that we are talking about just gluten at this point. We now know that many foods can cross react to these receptors and cause your symptoms.

Now before anyone runs off and decides to be tested for gluten of food allergies to deal with pain keep in mind that this may be a very new concept to your doctor. They are often not aware of this connection nor the weaknesses of the tests they can order nor have access to proper testing. For example, in the case of gluten, often, people will suspect food allergies or sensitivities are causing their pain. When they ask their GP to test them they are told that the tests show no sensitivity to gluten. This may well be because conventional testing through quest and other labs only look at 1 out of 6 antibodies. That gives you only a 16% chance it will come back positive. There are also well-known deficiencies in blood tests or scratch tests on anything less than sever reaction.

If you suffer from any auto-immune system diseases such as rheumatoid arthritis, MS, Hashimoto’s Thyroiditis then you should highly suspect that allergies and sensitivities will aggravate, if not be the cause if it. If you suffer from pain, inflammation or anything that there seems to be no answer for, I would suggest the following steps:

At the end of the day, if you are at a crossroads with your health, it’s time to think outside the box. It was only 50 years ago when “When all the best Doctor’s Smoked Camel Cigarettes” until it was found that it caused lung cancer. Understanding health and disease grows as time goes on. Some of the theories in natural medicine on such subjects as Vitamin D, Essential fats and nutrition were discarded until we discover their value. Now they are included in the medical journals. Often years will pass till new information is accepted. I believe the deep impact of allergies and sensitivities for all disease and ill-health is coming but is not yet commonly accepted. When we can look at the information logically, abstract information can make sense. All change and growth in understanding in our world has come about thanks to abstract but logical thinkers. Sometimes it takes science a little while to catch up.

Kenneth R. Hoffman, L.Ac, D.Ac (RI), is the Medical Director for Sophia Natural Health Center in Brookfield CT.It is the busiest Integrative Natural medicine Clinic in Connecticut where he has treated thousands of people with various conditions from arthritis to cancer to auto immune diseases, hypertension and more. He is a Doctor of Acupuncture in RI and an expert in the field of natural medicine. He has been studying and evolving his system of Integrative Natural Medicine for over 20 years and has trained with some of the best Holistic Physicians around the world. He is co-author of the book “Essential Remedies for Women’s Health” and is host of the radio show “ The Natural Medicine Connection” on 800 AM WLAD in Danbury CT.