What is gluten and how can it affect your health?

Most people have heard of gluten as the term “gluten-free”. It has become more popular in recent years. You will see this term put on the labels of food packages and even on menus at restaurants. People ask the question of whether to go gluten-free is worth it. Does it impact your health, or is it just another health trend?

Gluten is a general name for the proteins found in wheat. Gluten is also found in other grains such as barley, rye, spelt, kamut or malt. These proteins are gliaden and glutenin. They are responsible for the elasticity of dough and the chewiness of bread. Gluten tends to be in a lot foods at the grocery store which makes it challenging to stay away from. Some of these include bread flour, durum flour, couscous, multi-grain products, farina, etc.

The most well-known problem with gluten is called celiac disease. This is not too common, but can be serious in people in those who have it. It is an 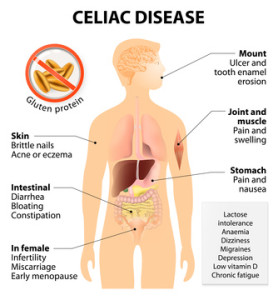 autoimmune condition. Celiac disease is where the immune system attacks the lining of the gut when the person eats gluten. This causes damage to the small intestine. Thus keeping your body from absorbing nutrients which can lead to malnutrition. A true diagnosis of celiac disease requires an intestinal biopsy.

A wheat allergy is an uncommon problem where the body has an immune reaction to wheat. Leading to either minor symptoms such as a skin reaction or watery eyes as soon as the wheat is ingested. It can also cause more serious reactions in a similar way to someone having a severe allergy to peanuts.

Some people do not have a wheat allergy or celiac disease, but still have a sensitivity to gluten. This is a non-celiac gluten sensitivity. They may experience abdominal cramping, fatigue, joint achiness or even brain fog. These symptoms may not occur right away after consuming gluten as with a wheat allergy. Gluten tends to be difficult to break down during digestion. Leading to low-grade inflammation in the gut, which may cause symptoms in some people.

A gluten-free diet may not be suitable for everyone. But going on a completely gluten-free diet for 3 months may be something to consider. Especially if you have symptoms caused by inflammation. Another option is to have specific blood tests run by a healthcare practitioner. Who can help you investigate any gluten sensitivities before going on a diet.

The New Yorker “Against the Grain Should you go gluten-free?”