If you have ever heard of Chinese Medicine you have probably have heard about one word – Acupuncture.

However, most likely you have never learned about other simple concepts surrounding the ancient yet effective medical system.

In this quick blog, you will learn three shocking Chinese Medicine secrets.

Have you ever seen the California Redwood“ Forest (sequoia sempervirens)? Trees span an average 200-240 ft high up. Generally, Sequoias live 500-700 years, although, some have been estimated to be over 2,000 years old! Among all the Redwoods, a tree named Hyperion is considered to be the tallest tree in the world. This towering tree stands a staggering 379.7 ft high above the earth.

Imagine how long that trees roots are! The roots need to pull water all the way up from the soil and feed the whole tree. How many gallons of water do you think it takes to feed these gigantic trees? Believe it or not, the roots pull on average 500 gallons of water up the tree every day. Looking up at one of those giant Sequoias, I can’t fathom how water can travel to the very top and nourish the highest stems and branches.

In Chinese Medicine, our bodies are similar to the root system found in the Redwood National Park. All too often, people get confused and treat the manifesting symptoms (branch). They often neglect the source (root) of the pending issue.

For instance, a headache is usually treated with Tylenol or Advil. Though, in a couple days or so, the same headache comes back. So, they pop more pills (branch treatment) and discard treating the headache at the source.

Yin, Yang, and You 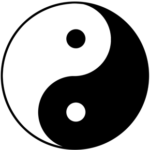 Yin & Yang is a theory that is well known in the Eastern medical world. On one side, you have the darker solid side, and on the other, the opposite white counterpart. There is a clear logic in understanding this relationship. Each half represents one side of the coin. The white is yang, while the black section is considered yin. Within each part, two little dots complete the image. These dots signify the concept of mutual counteraction; yin within yang and yang within yin.

The white (yang) represents day time, hot, light, active, and summer. While the black (yin), represents night, cold, heavy, passive, and winter. The black dot illuminates the idea that during the utmost yang of the year (summer) the heat will eventually cool and turn into autumn (yin within yang). Similarly, the white dot, expresses the fact that the utmost yin (winter) will soon change into spring (yang within yin). The same principles hold true for all phenomena found in the universe and the human body. The ancients believed that there is always a constant flux of yin and yang that teach us how to live in harmony. Not only that, the ancients developed a system of healing around the basic principles of yin and yang to naturally promote healing in all living beings (known today as Traditional Chinese Medicine). 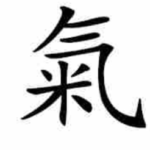 Have you heard the word Qi before? (pronounced chee). Everything on earth and the universe is made up of this energy. Every cloud, every leaf, and even YOU are made up of Qi. In Western Medicine, we understand the scientific fact that everything is composed of swirling protons, neutrons, electrons. Chinese Medicine knew all of this even before the advent of modern medicine. Essentially, Qi is the old school way of explaining twenty-first century science. The ancients understood that there lies an intrinsic energetic connection between humans and nature.

As well as, if we look at the Chinese character for Qi, you will notice how dynamic and expressive the symbol looks (image found below). Eastern culture uses written language as an artful expression to explain words and concepts. For instance, to the right of the image, there is a shield-like structure encasing the symbol. This represents that Qi is a strong force and can protect the body (similar to how the immune system is our main-line of defense). Qi is said to be interconnected with the modern understanding of human immunity. To the lower left, just behind the shield, the symbol of Qi emerges. See how expressive the lines are. They spew out in every direction possible. This part of the symbol illustrates how energetic Qi really is. From analyzing the Chinese character, we can begin to understand the functions that Qi contains.

Even more so, Qi and blood are intimately related. There is a famous quote, “Qi is the commander of blood, and blood is the mother of Qi.” Without energy, blood will coagulate and stop moving. Conversely, without blood, Qi has no force to push, thus, separating.

Last point, once we start to understand the origin of Qi, we can move on to how Chinese Medicine uses it in a clinical sense. Acupuncturists perceive this phenomena as a collection of various types of energetic patterns found within the body. To break it down, we view it as being either not enough (Qi deficiency), stuck (Qi stagnation), or a feeling of counterflow (rebellious Qi). Acupuncture may manipulate channel pathways to encourage the unblocking, building, and/or correcting the normal flow of energy throughout the body.

At SOPHIA Natural Health Center, we use these basic principles to help the body heal itself. For a free consultation, please call our office at 203 740 9300.